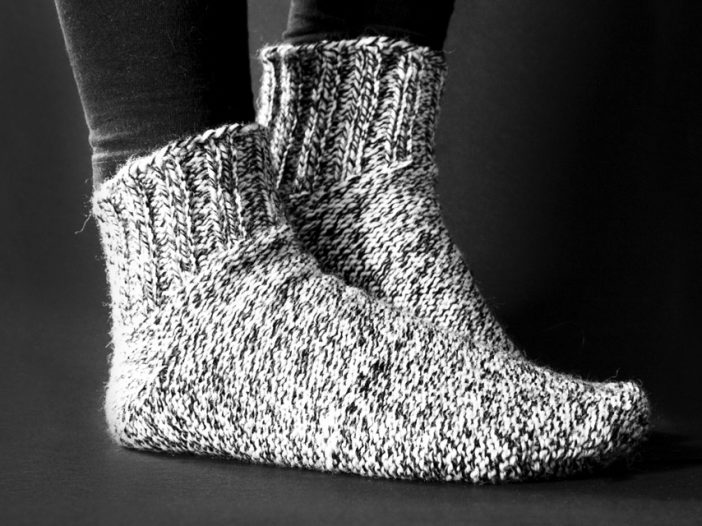 When I first started knitting I couldn’t understand why anyone would knit socks. Spending all that time just to stomp all over your finished knit with your feet, what. Eventually I started making sweaters and suddenly socks started to seem like very enticing, quick little projects. That, and I started to wonder how much warmer I’d be if I started to knit everything I could.

It turns out socks aren’t quick after all, with the tiny needles and the tight gauge, but mostly because I suffer from intense second sock syndrome. I’ve finished some socks within a couple of weeks, but usually each pair takes me a lot longer. In the end though that might be exactly why I’ve grown so fond of making them. I tend to get a bit obsessed when I’m working on a sweater, especially when the end is in sight, so it’s nice to have something else to work on for just a few minutes at a time. Socks are where I switch over from being a project to a process knitter, although really the ‘process’ I enjoy the most in this case is simply stockinette over and over and over again, which I can put away when I get bored.

These chunky little socks were a nice little surprise, they were finished before I knew it. 3.25mm needles, crazy! Of course that second sock did take much longer than the first but I feel like I only sat down a couple of times to actually work on them and poof, a pair of socks. Each one took 1 skein exactly so they’re a little bit short but they’re for wearing at home so I think my ankles will survive. I was hoping to make a second pair as a gift but to make those in a bigger size, I’ll have to do a contrast heel, toe and maybe ribbing too, as I only have 2 skeins left. I should cast on soon, can’t be without a pair of socks on the needles anymore.